After a couple years of land ownership, we’re finally living on our land, in the first house we’ve ever built, a #barndominium in the metal pole barn that used to house the tractor and farm truck. This barn:

The 7 months prior to move-in were heavy. Learning how to build a house while building it was intense, on top of full-time jobs, land upkeep, and life’s day-to-day. So you can probably understand why we designated the first month of life in barnbungalow as build-free-niksen time, which was glorious.

After the month off, we tiptoed back into the to-do list, ticking off at least a task a week, like shelves, trimwork, and a new “yoga porch.”

There’s still a ton to finish, inside and outside, but the house is more than livable. It’s luxuriously quiet and comfortable, and it’s come a long way from this: 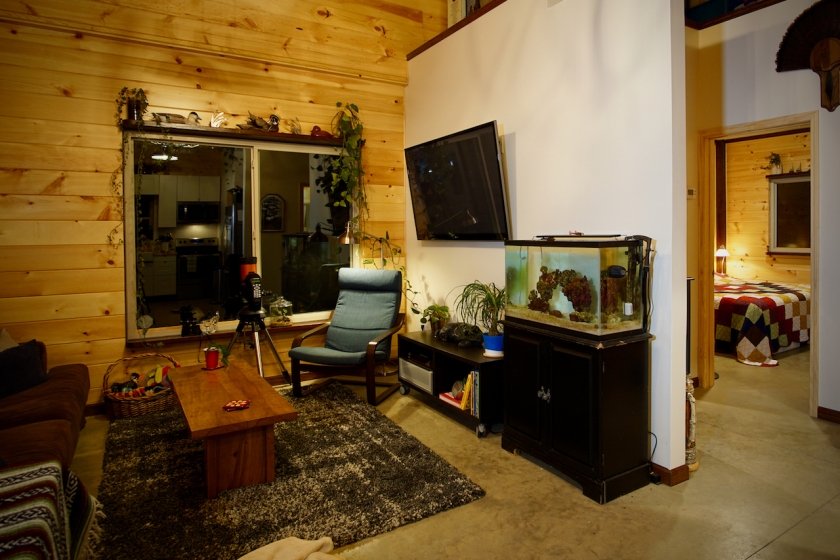 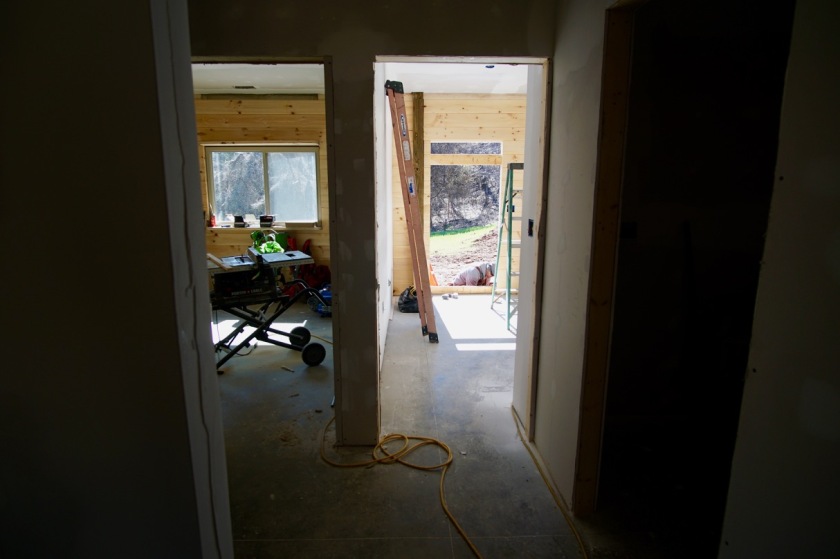 The most consistent reaction from visitors is it’s more spacious than they expected for 720 square feet. Not to geek out, but is that because the floorplan has divine proportions? Here’s a rough version of the floorplan with a golden-geometry overlay:

The orange walls are soundproofed, a lesson we took from the yellow rental dome, which was unsettlingly noisy because of building shortcuts (and not because of its geodesic-ness; the geodesic acoustics were actually neat). Cabinets and doors rattled and banged. An upstairs toilet flushed with gurgling gusto down an exposed pipe in a corner of the kitchen. Bathroom exhaust fans, a.k.a. “fart boxes,” were lawnmower loud.

The fans, especially, tormented me (not to mention we think they were just blowing the moisture behind the drywall). That’s why, for barnbungalow, we splurged on the quietest fans we could buy, the ones that sigh like a distant ocean. Worth it. It cost about $100 extra for upgraded fartboxes, but you have to fight the good fight against moisture in the Smokies, and you don’t want to go deaf doing it.

Besides preserving sanity, noise management makes a small space feel larger. Chris is an early bird and I’m a night owl. Soundproofing has taken the stress out of being ourselves.

On the floorplan above, the phi-grid overlay covers the orange wall between the full bath and pantry, but that’s soundproofed, too, along a few other walls we soundproofed on a whim. Chris made sure we did the bedroom ceilings, a good idea in a metal home, especially with the hail-rains we’ve had this year.

Speaking of ceilings, the floorplan doesn’t show the ceiling heights, ranging from 9′ to 16-ish’, another reason the home is so breathable, ahhhhh.

Designing a house from scratch lets you customize it for your habits. Because of our lark/owl schedules, we opened the main closet to the hall instead of the bedroom. This helps us not wake each other if one wants to get moving while the other sleeps.

During framing, we shrank the closet to make the bedroom bigger and save money on support beams for the loft above. I worried we were making it too small, but it’s just right. It fits a shelving system on one side, bins on the other side, and Clover in the middle when it thunders.

Another customization was to carve out a 2nd bedroom so I could have a study. I work from home and spend a lot of time writing, researching, and doing homestead admin. My preferred MO is to hide out while doing all of that. The study is a delightful hidey hole. 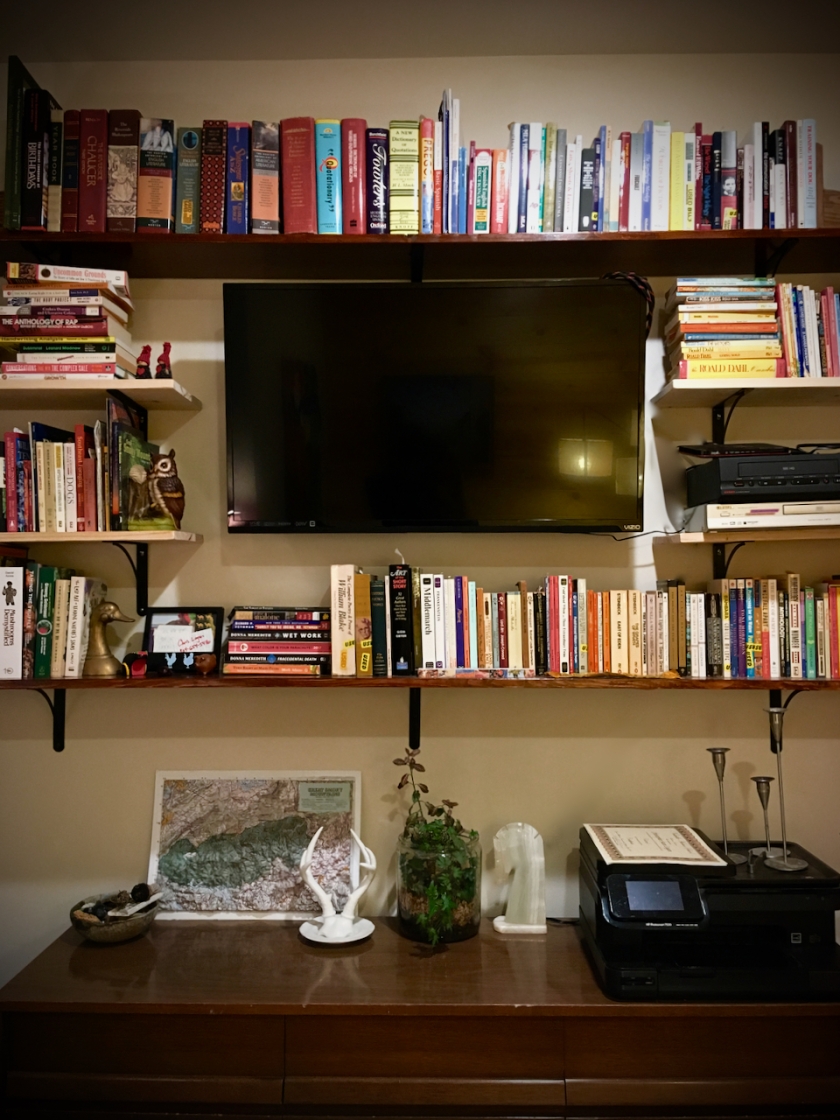 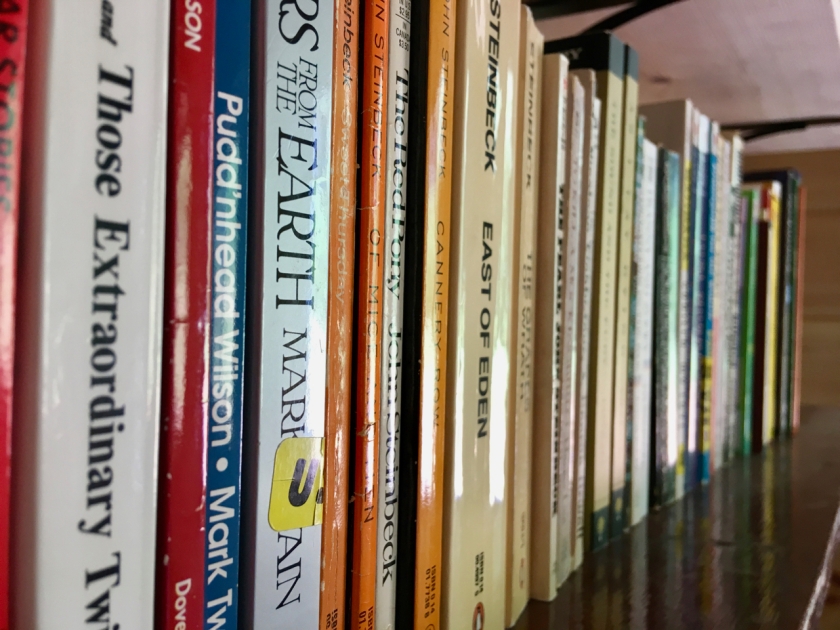 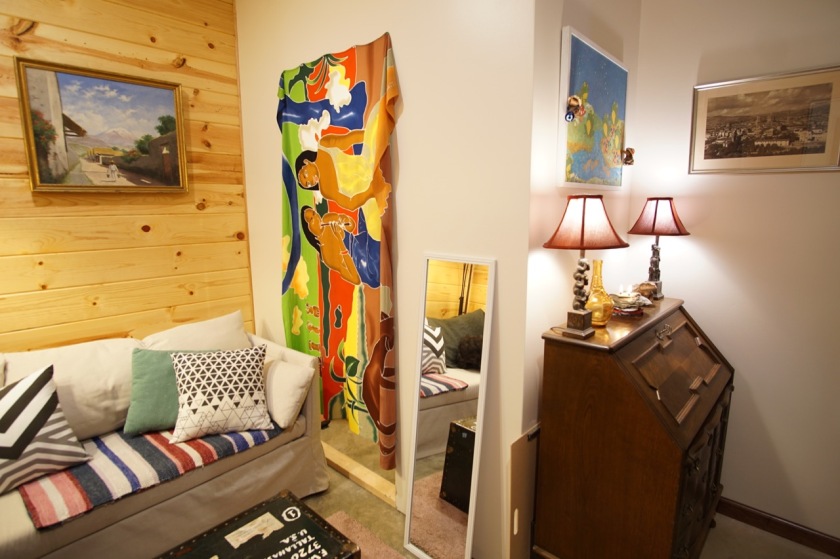 Beyond the Gauguin tapestry is the magical powder room. During our research stage, we found that most small-house plans stuck with 1 bath. The price and sacrifice in study space are far outweighed by the bliss of a 2nd bath. The tapestry will eventually be replaced by a barn-door slider.

Back in the hub hall, hang a left for the full bath.

This was by far the most challenging room to plan. For the rough plumb, we had to painstakingly measure drain locations for the shower, sink, and toilet before the house had a floor, let alone walls to use as guides.

We made leaps of faith regarding the size/shape of the shower and placement/size of the vanity. Does a round shower really work (yes, it’s great), and how does that affect the amount of space necessary between toilet, vanity, and shower? Writing about this even now, after everything fit beautifully, makes my stomach clench.

On the full-bath to-do list are window sill, hardware, and backsplash/decor.

Last but not least, the kitchen, which went from this… 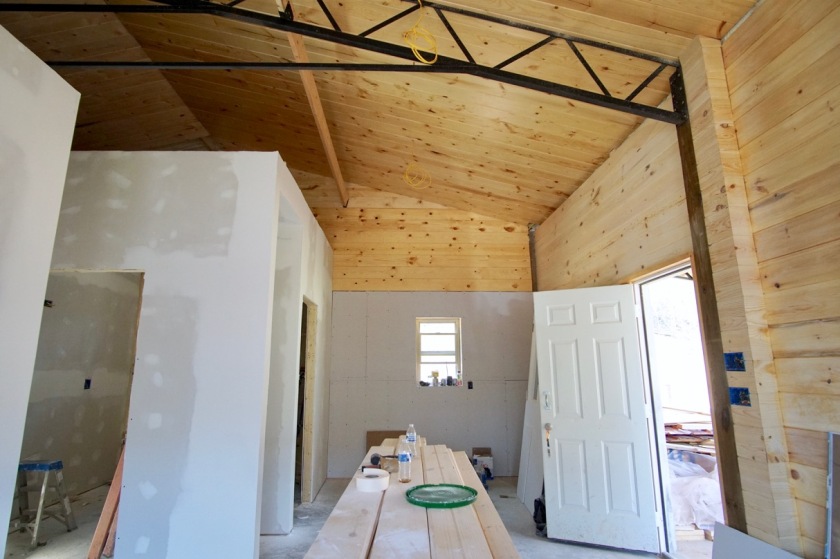 We’re still missing that backsplash. Not to mention spacers, pulls, under-cabinet lighting, toe-kicks, and pantry shelves and door. All projects for the near future.

Outside, the front porch is an oasis. Here are current and planned looks for the exterior, excluding landscaping.

Future, not to scale (the porch is bigger than I realized, and that grass is a little aggressive): The front of the barn will sport decorative crossbars and a barn quilt. Something like the below. We’ve planned a native garden to balance the slope along the front edge.

For now, BamBam is content with our progress and the random assortment of places on the porch to rest his fluffy head, from hammock to hand chair.

We’re happy, too, which is good, because projects for the next few weeks are already slated, including this overhang to expand the shelter of our shed.

Now that you’ve seen the inside of the barn, look around outside!