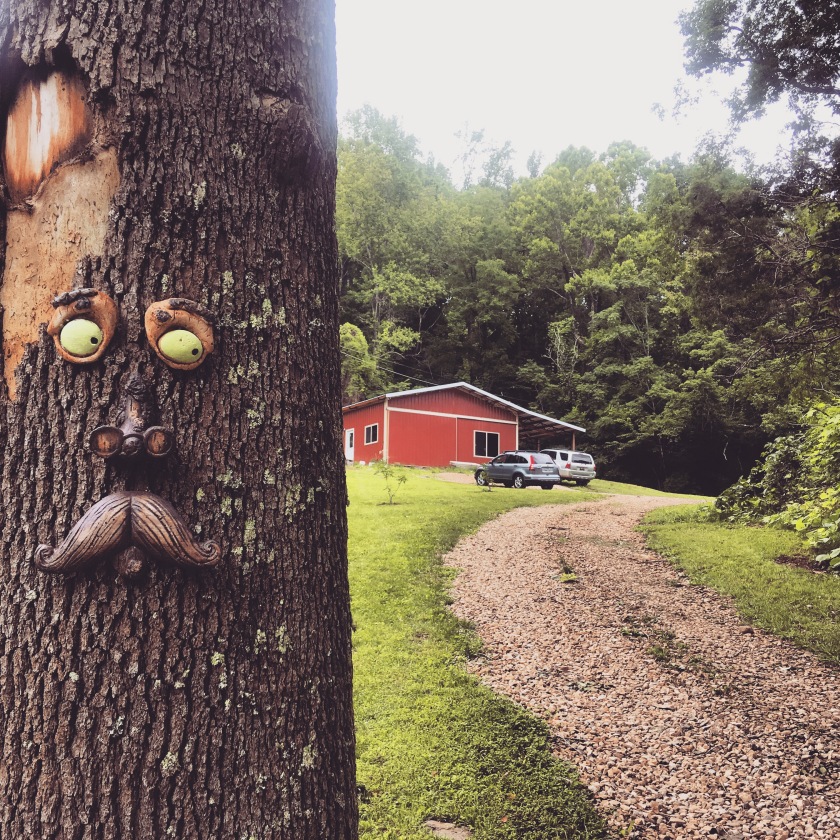 It’s 6 p.m. I slap the computer shut with the satisfying “fwap” that signals the end of another work day. In a past life, it would be time to go to the gym or grocery shop, meet friends for a jog or glass of wine…

That life is a distant memory. I hobble to the kitchen to brew coffee and forage a frozen waffle for supper. I feed and walk the dogs, mimicking a morning routine that took place 10 hours ago, before my paying job started for the day. With a hobo bag of work gloves, tools, flashlights, purchases from the hardware store, and a thermos of coffee, I head to the barn. 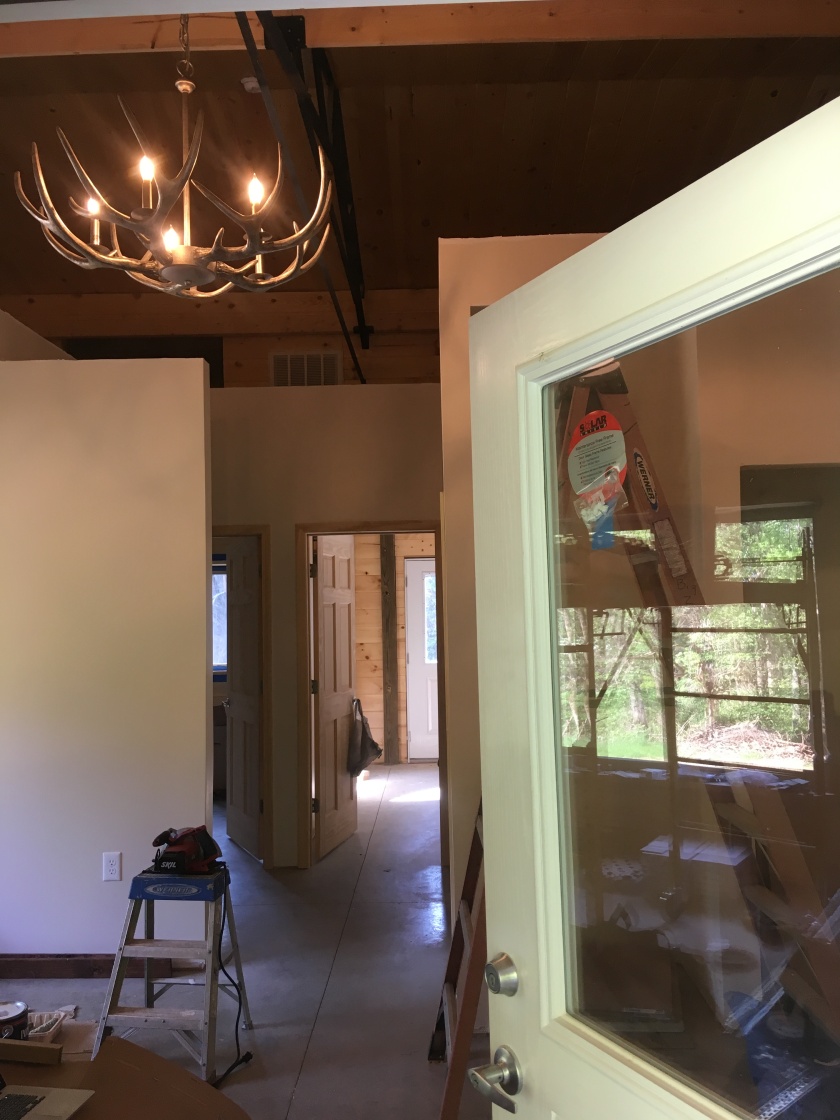 If Chris isn’t out of town for work, he’s probably here already. He starts his day earlier, so he’ll go home in the next couple hours. One of our dogs currently needs round-the-clock care, so the staggered schedule works. If Chris is out of town, the dog may be perched on her cushion away from flying building materials. By 10 p.m., 3 podcasts in, I uncap the coffee thermos to fuel a 2nd (or 3rd or 4th) wind. On a good night, I’ll work until 2 before my brain cries, “Uncle.”

Other nights, Chris and I kick off 2nd shift at our 3rd home, the big-box hardware store exactly 4 miles, or 8 minutes, from our land, where the staff knows us well enough to ask after our progress. Once, as we were comparing toilet dimensions, the plumbing-section supervisor walked by checked his watch.

“You mean building a house?” I said.

And here I thought I was so original: I’d been referring to barnbungalow as another full-time job but hadn’t understood how typical this was for owner-homebuilders.

If you’ve built or renovated a house from the ground up, you may be saying “duh, it’s a lot of work,” but try to remember that time, way back, before you fully reconciled the level of commitment it would require. Homebuilding is the kind of adventure you only embark on after accepting the lie, “it won’t be as hard as they say.”

It’s a good lie. It makes you less afraid to do amazing things, like live in a barn, which we do!

We Live in a Barn
(Tour it here.) We moved in about 6 weeks ago, in a messy-haired, exhausting scramble to escape not only an awful rental house but all the extra stuff we had.

It was a hard move. Decluttering, an exhausting emotional autopsy in the best of times, could’ve qualified as a 3rd full-time job as we downsized from 2,000+ square feet to 720.

Somehow we’re more comfortable in 720 square feet than 2,000+. However, getting to this point was a ton of work, completed in crushing conjunction with the other factor amplifying our stress: we needed to finish building the house we were moving to. Our plates were very full.

The Countdown
Target move-out from the awful rental was May 31. At the beginning of May, barnbungalow had plumbing fixtures, running water, and an APPROVED electrical-inspection sticker, the only sticker needed for a certificate of occupancy in our county. Still missing, though: kitchen appliances, trimwork, closet shelves, and a floor in the loft so we could move our stuff in. Oh, and a shower.

Of course, you can move in to a house without trimwork and shelves, but once your belongings are in the way, everything becomes more challenging. We wanted to finish as much as possible with our pre-move-in momentum to reduce future frustration and  “temporary-to-permanent” syndrome.

Ever walk into an owner-built house with pink insulation for walls and no door knobs, even though they moved in 5 years ago? That’s temporary-to-permanent. You push so hard to earn the APPROVED sticker that all motivation to finish the house evaporates the moment the last moving box hits the floor. People can only go so hard for so long.

It’s okay to use painter’s tape as kitchen-drawer pulls or a tapestry as a door as you recover from the move, but too many things left unfinished make a home unbearably chaotic. We were building barnbungalow to escape that kind of chaos.

With May 31 rapidly approaching, we pulled together a to-do list and attacked it at the unrealistic pace of a reality TV show, in a homebuilding Hail Mary.

T-Minus 2 Weeks
In the 2nd week of May, our shed, a.k.a. Baby Barn, was delivered, which meant all the building materials could be stored somewhere other than the barn and we could finally use our porch as a porch. 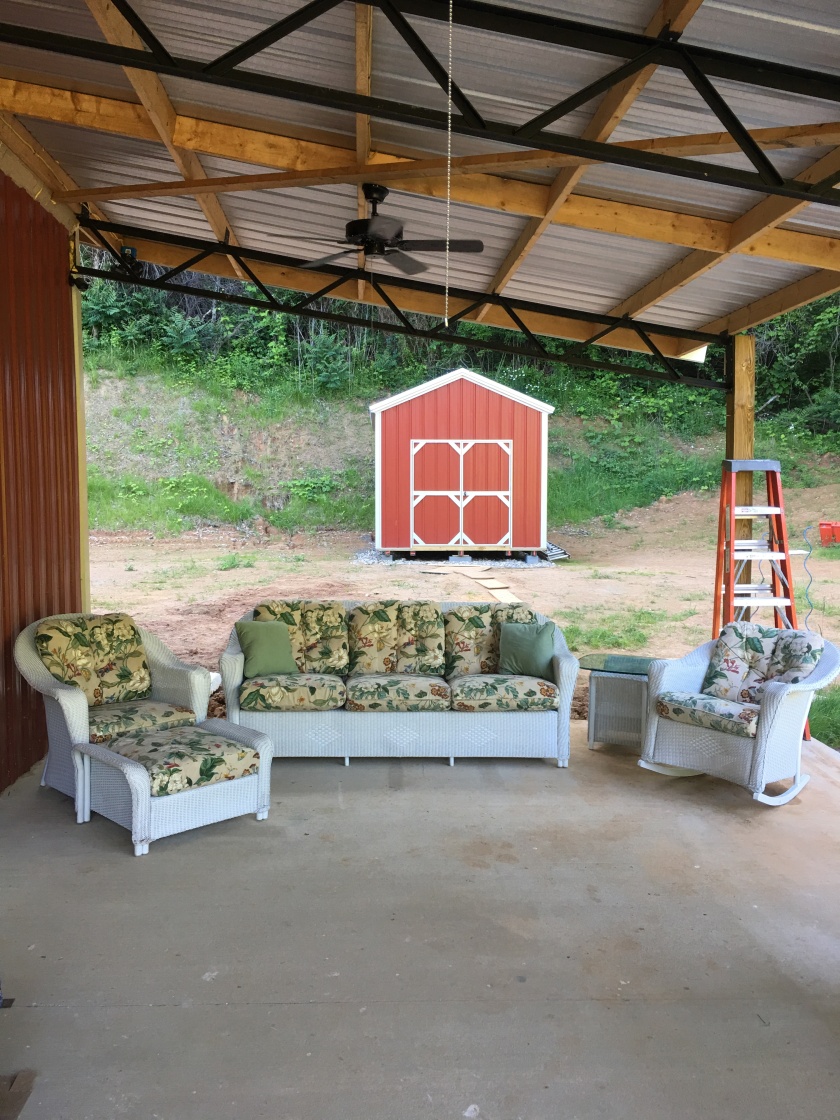 Sitting quietly and comfortably on the porch for the first time ever, we watched hummingbirds sip from the flowers of a barn-warming petunia from a beloved neighbor.

Appliances had just been delivered, and the first thing heated on the new stove was hummingbird nectar. Life was becoming bucolic in fits and starts.

Our dog has something called “coonhound paralysis,” by the way. She’s getting better every day.

Annnd, microwave in. We may or may not still be living backsplash-free, with painter’s tape for drawer pulls. We promise it won’t be permanent.

The massive to-do list was shrinking. In our “free time,” we wiped final coats of polyurethane on tongue & groove and English chestnut stain on polebarn poles (which we left exposed to remind occupants that this is, in fact, a polebarn).

Back at the awful rental, I finished sorting and packing rooms while Chris did the literal heavy lifting of filling the storage unit with furniture we’re saving for the dome. He made endless landfill and donation runs. Thanks to Chris’ labor, we didn’t need professional movers this time, even for the big stuff. Just 2 full days of U-haul rental and gracious help from friends and their army of tall teenagers.

The Shower Saga and Our First Contractor Firing
Every build probably has a last project that dictates the move-in date. In our case, we were moving in by 5/31 no matter what, but as May whizzed by, it was starting to look like we’d be showering under the hose.

For many reasons – size, appearance, the way the plumbers got crazy with shower-drain placement in the floor – we decided on a custom-tiled shower instead of plastic tray and walls. Showers are expensive and technical, like anything in a house that involves water, can be one of the hardest parts of the house to plan. We shifted visions a dozen times before accepting a bid from a contractor who got an honest start in April and then vamoosed.

We knew he had a bigger job in an adjacent county, and he knew our move-in deadline, so when we fired him, it was on good terms.

It was the first time we’ve let someone go. Firing contractors comes with risks. How will they react? Can another contractor pick up the project mid-stream and stay in budget? Will it make us look unreasonable and drive away other contractors?

In this case, it helped that we had a great working relationship and had been exceptionally clear about our timeframe. He was making 18x the money on the other job and had to take advantage of a series of rare rainless days in May. He couldn’t meet our deadline. He invoiced us for work and materials, and he left some of his tools for the next month, which came in handy.

Chris immediately invited another crew to review the shower. We negotiated a price to finish tiling, grout, and door installation. They were finished in a week. 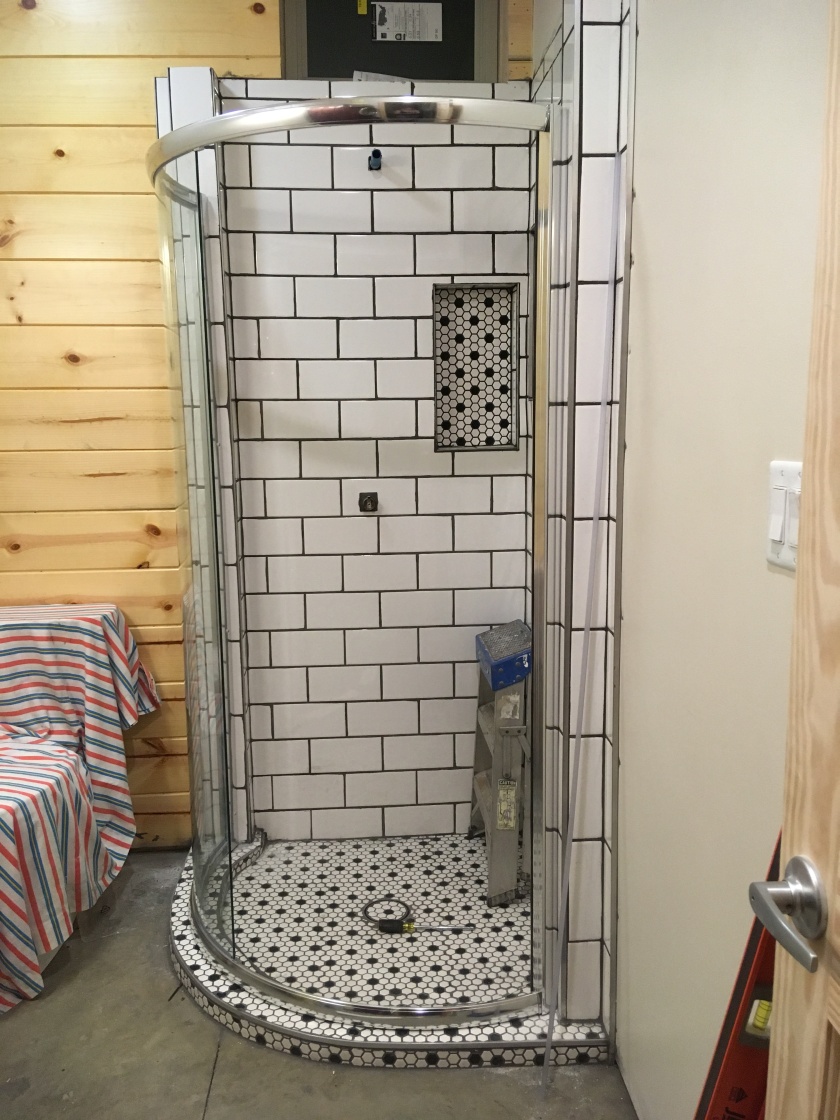 We didn’t take these decisions lightly, but the shower saga would’ve been a lot harder at the beginning of the build. We used to agonize over every conversation with contractors. Now, we don’t. We changed course decisively and finished on time. It was like passing the final exam of the “accidentally became the general contractors of our own home” course we never meant to enroll in. We’ve completed freshman year, at least. 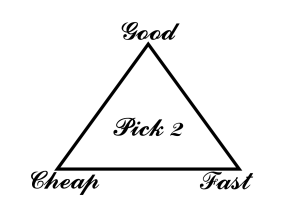 Of the good-cheap-fast triangle, the crew who finished the shower were cheap and fast. We would have preferred good and fast, which is what those same contractors were on a previous job. The shower is cheerful and the perfect size and shape for the space, but it needs tweaking. Maybe even replacing. Sigh.

However, by the 3rd week of May, the shower was functional, which meant we were ready to move in, and we did.

Relinquishing the keys to the old yellow rental dome was one of the best feelings in the world. Peace out, domie. 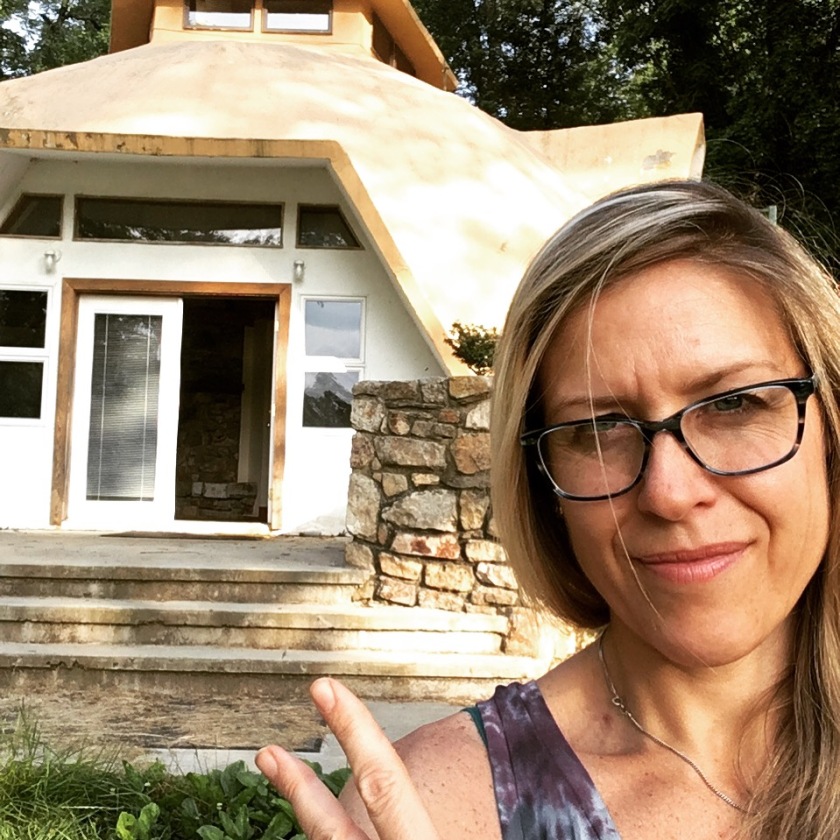 Onward…and Farmward and Domeward
How is life on our land? It’s so great, it gets its own post, and you can tour the barndominium here.

#reflections #autumn #fallcolors #blueridgeparkway #appalachia
Homemade treats for the feather kids (and a banana bread for us). #backyardchickens #mypetsmakemebreakfast #chickens
Happy sigh. #landlife #autumn #smokymountains
Where do you vacation when you’re currently obsessing #regenerative agriculture? Places where you can see #permaculture techniques in action. Longhorns help keep this popular part of the National Forest accessible by grazing, but only in the summer when forage is ample and the ground can handle their weight. #nomowingrequired #longhorns
Finally edited all the photos…feeling pretty wistful about our first big, just-the-2-of-us roadtrip in recent memory, exploring the country roads of western #Virginia. #naturalbridge #naturalbridgestatepark #nointerstates
Whatever you do, don’t tell our chickens how much time we spent with the @PolyfaceFarm laying hens on our Virginiastravaganza road trip last week.

#reflections #autumn #fallcolors #blueridgeparkway #appalachia
Homemade treats for the feather kids (and a banana bread for us). #backyardchickens #mypetsmakemebreakfast #chickens
Happy sigh. #landlife #autumn #smokymountains
Where do you vacation when you’re currently obsessing #regenerative agriculture? Places where you can see #permaculture techniques in action. Longhorns help keep this popular part of the National Forest accessible by grazing, but only in the summer when forage is ample and the ground can handle their weight. #nomowingrequired #longhorns
Finally edited all the photos…feeling pretty wistful about our first big, just-the-2-of-us roadtrip in recent memory, exploring the country roads of western #Virginia. #naturalbridge #naturalbridgestatepark #nointerstates
Whatever you do, don’t tell our chickens how much time we spent with the @PolyfaceFarm laying hens on our Virginiastravaganza road trip last week.