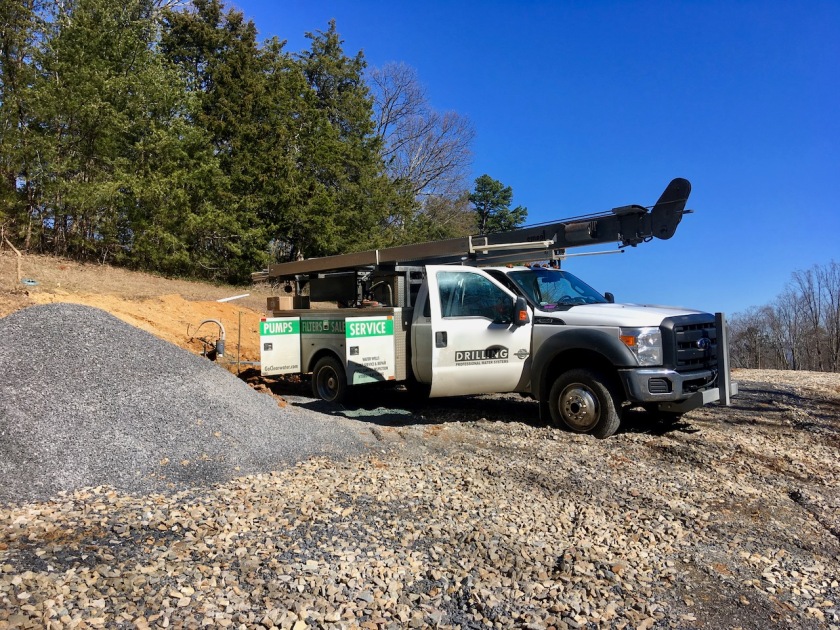 Last fall, we had a well drilled on our 20 acres. As far as we know, it’s the first well here. The neighbors said anyone who lived on this land before drew their water from the spring.

We would have loved to do that. It’s still common in this region for house water to be pulled out of creeks. However, ours is a “wet-weather spring”: it runs from October to June, so summers would be thirsty.

According to the neighbors, creeks in the area started to dry up in hot weather 10 years ago. Maybe one day ours will come back full time. It’s so serene. For now, it seems to spend the winter months cleaning up all the fall leaves and weeds that sprung up in its bed over the summer.

Back to the well: drilling was completed months ago. At that point, we were the proud owners of a fancy, 700′ pipe in the ground. We couldn’t access the water without a pump.

There was no reason to install the pump last fall, but with barnbungalow shaping up, we’re ready to draw water. For us, that has entailed…

Pipe and Wire
These 2 items were fully 15% of our “Operation Drinking Water” costs. Logistics are expensive when you start from scratch and have lot of distance to cover.

For instance, it’s 400′ from well to barn, so we had to install 400′ of water pipe through a 3′-deep trench excavated through rocky soil on a slope.

This was still cheaper by thousands than digging a second well down by the barn.

That little gray pipe at the end of the video is the well. Bringing water out of that pipe requires electricity.* The well is 100′ from power box to well, so that was 100′ of pricey wire. We already had a trench to the domesite with conduit in place. We were able to run the wire through that existing conduit for the well since the well is so close to the domesite. That was good. 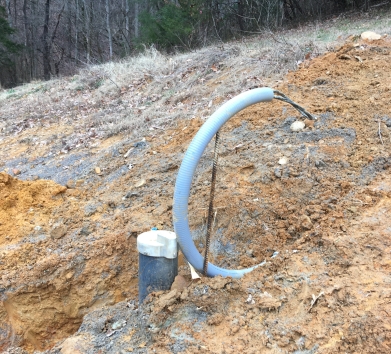 * Technically there are ways to bring water out of your well without electricity. For instance, a hand pump, which we would’ve liked in case of emergency. However, our static water level is so deep that a hand pump would’ve been expensive and not useful. It would be nearly impossible to pump water up that far by hand.

Pump and Pressure Tank
A few weeks ago, our well crew called out of the blue on a blue-skied Saturday morning to say they could come install the pump.

It was a day we’d promised ourselves a break from the land. We were going to work on our Smokies 900 goal with a hike in the National Park. Days off like that are important to keep from burning out.

Even more important? Drinking water. And when a contractor offers work, we don’t turn them away. We’d had a well-pump quote in hand for weeks, and the crew was giving us dibs on a rare sunny day (this winter has been the rainiest ever on record for our area). Chris yanked on his work boots and drove to the property to meet them.

I followed a little later with the drone, and we watched as they lowered a submersible pump 680′ down the hole.

It was a day-long process. Chris made a few supply runs, and instead of hiking the National Park, I hiked our land with a pair of clippers to take down invasive greenthorn, a plant that basically exists to shred your legs. 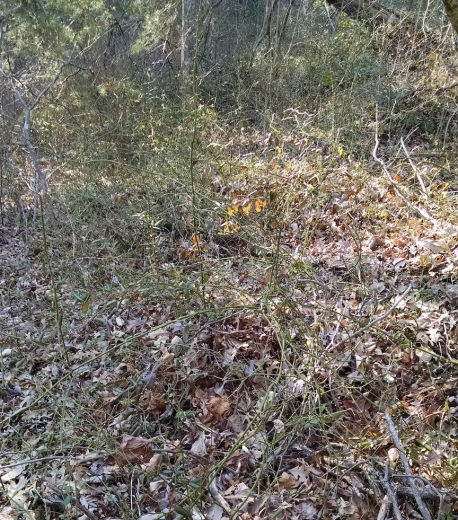 Winter is a great time to reduce invasives. They stand out as the only green plants on the ground, and in the cold weather, you don’t have to contend with bugs, snakes, or other brush.

By the time I finished Edward Scissorhandsing the woods in late afternoon, Chris was pulling up and the crew was wrapping up. With the pressure tank assembly in place, we were ready to meet our water. 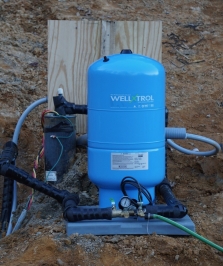 Drillers shock new wells to clean out anything bad introduced during the drilling process. This means the first water that comes out of the well is filled with bleach.

Our natural drainage sends water to the creek, which is full of salamanders and crawdads who we don’t want to shock with bleach. Chris brought one of our garden hoses over (we’re moving over here piece by piece!), and routed the first water down a drainage line we had installed to keep the domesite dry.

Click or pinch in to see a two-lined salamander highlighted in this photo. 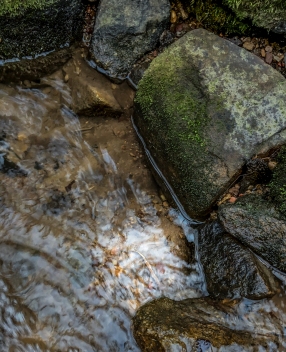 Here’s what the well water looked like in the first moments it started running. Because of how much we care about this place and have invested in making it a long-term homestead, this moment was ridiculously cool.

As advised, we ran the water overnight to thoroughly flush the well. By morning, the water was ready for a taste test. We toasted with well-water shooters.

The verdict: fantastic! Crystal clear and some of the nicest water we’ve ever tasted.

We’re not just saying that. The best way to describe it is that it smells and tastes how you always hope water will smell and taste like when you’re about to take a swig. The above phone snap doesn’t do it justice.

We’ll test the water soon to get a profile of what’s in it. Our region is high in minerals that can wreak havoc on pipes, and for Chris’ fish tanks, it’s nice to know what minerals we will and won’t need to supplement.

We built a temporary, heavily insulated house around the above-ground pieces. Eventually, those components will live inside the dome. For now, it’s protected from the elements, and our domestead has drinking water!

Their guilt game is strong on bed-washing day.
Polypore-a-rama!
Season’s greetings from the Tennessee tundra. Santa brought the North Pole this year.
We can’t count how many times an ash tree has crashed down and blocked us in, thanks to the hard work of the emerald ash borer. Luckily thanks to Greta the Tractor - and Chris’ mad tractoring skills - we’re usually all clear in no time. And so it goes.
No but for real.
They still wanted to walk 🤷‍♀️ but you don’t even want to touch that windchill. #winternopeland #winter #browndogs #snow

Their guilt game is strong on bed-washing day.
Polypore-a-rama!
Season’s greetings from the Tennessee tundra. Santa brought the North Pole this year.
We can’t count how many times an ash tree has crashed down and blocked us in, thanks to the hard work of the emerald ash borer. Luckily thanks to Greta the Tractor - and Chris’ mad tractoring skills - we’re usually all clear in no time. And so it goes.
No but for real.
They still wanted to walk 🤷‍♀️ but you don’t even want to touch that windchill. #winternopeland #winter #browndogs #snow