Way back on our first walk around the property, we noticed a small, 6′ deep sinkhole in the kudzu field. It was out of the way, and we figured it could be fixed with a load of rocks and dirt, so we mostly forgot about it.

The wet-season creek ran into it about 8 months out of the year but rarely filled it up. After big rains, the bigger problem was that the creek flooded the driveway, so our first big excavation project included adding a culvert to divert the creek under the driveway. 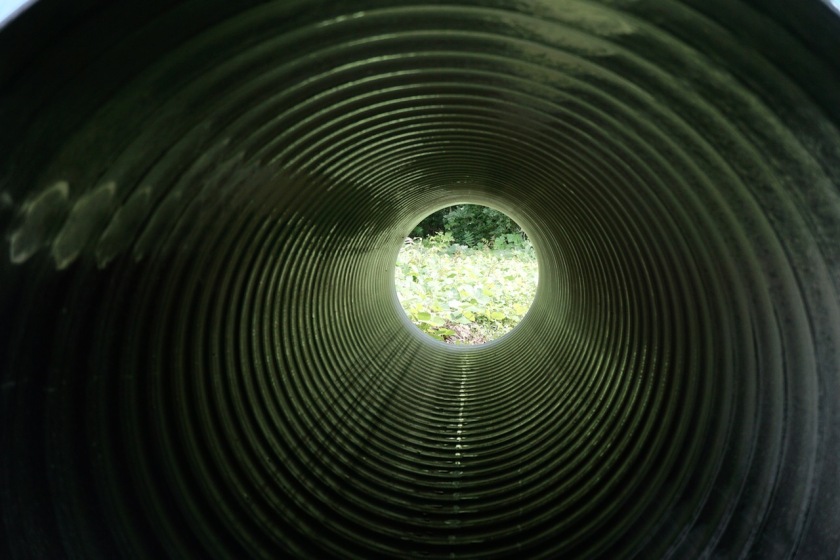 There’s a rule that water will go where it wants no matter how hard you try to stop it, so we put the culvert at the angle where the creek seemed to want to go and moved to other projects.

December 2018 brought record-breaking rains. Beth drove over to meet contractors at the barn one morning and was met by 2 contractors and one major sinkhole about to eat the driveway.

Water filled the small sinkhole, and the ground gave way and turned it into a big sinkhole.

There isn’t a sure way to fix a sinkhole, but something had to be done. The driveway is one of the most costly assets on the land. We needed to take measures to save it but weren’t exactly clear about what those measures were.

My first step was to stretch a giant tarp over the hole (we happened to have one) to try to keep the ground from getting wetter and weaker. 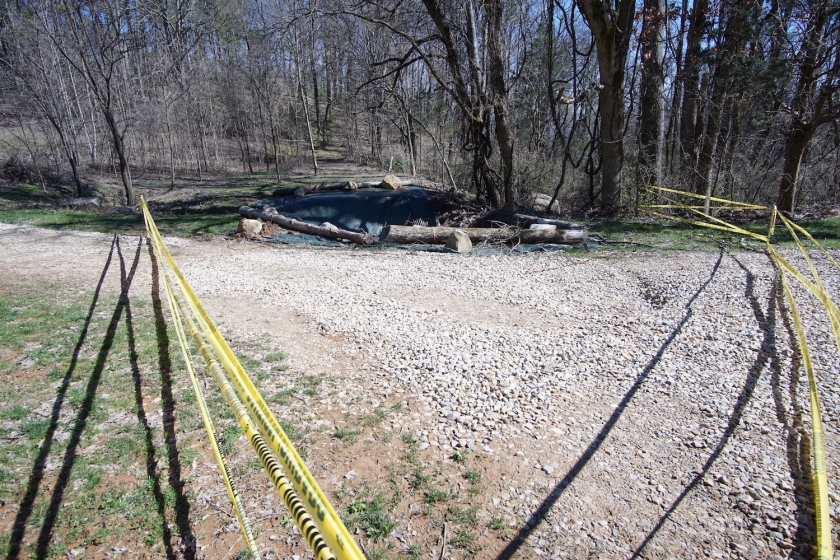 We tied off the driveway with caution tape. We were in the middle of converting the barn and had a lot of heavy machinery around. The last thing we needed was a 50-ton lineman’s truck sliding into the hole.

There was one other problem on the other side of the driveway. Not all of the creek seemed to be going into the culvert. It looked like some was running around the pipe, under the driveway, directly towards the sinkhole. If so, we worried it could open up a cave under the driveway if there wasn’t one there already. I triaged the culvert with thick plastic stapled and weighed down with gravel. It wasn’t pretty, but it worked great.

To figure out next steps, I met with GC Doug and Zach, our go-to guy for everything, and Doug came up with our plan A.

Plan A
The creek was running into the hole, pooling at the bottom, then disappearing. East Tennessee is full of caves. Our mountain even has a tourist cave on it. This made us wonder if a cave was swallowing up the creek. If so, we wanted to dig down past all the rocks and mud in the sinkhole to find the opening, then place a 3′ wide drainpipe vertically into the mouth of the cave, like a shower drain.

This would allow the water to go where it wanted without taking the earth around it with it. We’d dig under the driveway to check for hidden voids that could open in the future and fill in everything with rocks and dirt.

For good measure, I called our local rep from the Tennessee Department of Environment and Conservation, Barry.

Barry confirmed our plan sounded fine. You can’t totally predict a sinkhole’s behavior, but most people have success by diverting the water and filling the hole.

January and February brought more record rains. The sinkhole was about 40′ wide and 20′ deep. After heavy rains, it filled up and overflowed to the creekbed behind it. Eventually the water would sink down and mysteriously empty out. Each time that happened, more dirt would fall in. Eventually the tarp was useless, but it had a good run.

It was mid March before the ground was dry enough for Zach to excavate the hole.

…and dug, and he never reached an obvious cave opening.

At least the excavation proved there wasn’t a cave under the driveway. Not yet anyway! When we all decided he should be done digging, Zach smoothed the driveway and replaced the caution tape with boulders to make sure nobody drove into the hole.

We hadn’t expected to not find an opening. Doug advised we wait for the sinkhole to fill up and flush again, and maybe the cave would reveal itself.

Plan B
It took 2 full months to flush out. When it did, the glorious cave opening we’d been waiting for ended up being no bigger than a groundhog hole.

By this time, we were no longer planning to dig any deeper. We had reconfigured our master plan to something more efficient and affordable, if “affordable” is even a word we can use here. Sinkholes are one of those unplanned costs you have to plan for if you own land.

I’d been studying sinkholes on the internet and studying our sinkhole until I went cross-eyed. It literally kept me up at night. Then an older neighbor shared there had been another sinkhole in that same place before and had been filled in.

With this knowledge, I took a long, hard look at the layout of the land and creek. That’s when I noticed we had placed the driveway culvert at an angle that didn’t go with the natural path of the creek. 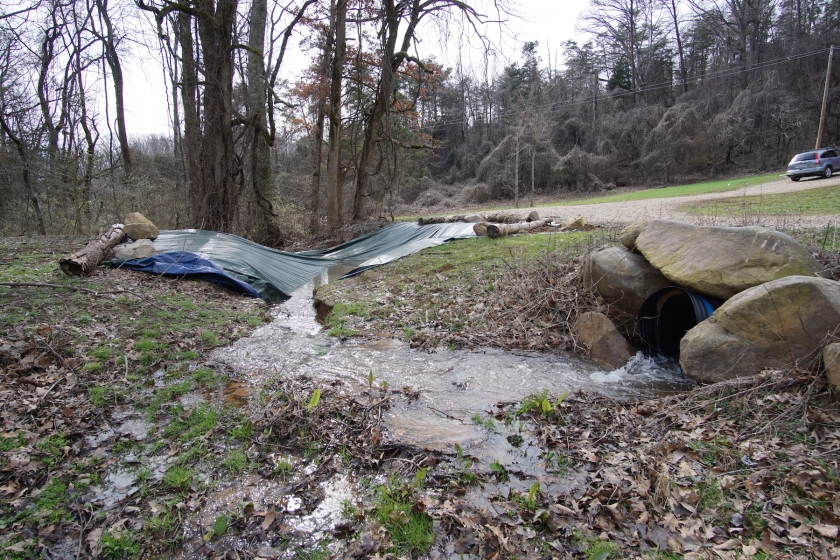 We had laid the culvert the way the previous landowners ran the creek after filling the sinkhole. But that was a mistake. It created a 90° turn that shouldn’t be there. This unnatural bend was causing the creek to cut into the driveway and wash away our precious dirt and gravel. In addition, the previous sinkhole filling created an unintentional dam at the back of the sinkhole, giving the overflow nowhere to go.

The sinkhole now made more sense to me. I devised a new plan:

From Hole to Whole
It was September before Zach could come back, but when he said he was available, I snapped into action to have all the materials onsite on time. Zach’s schedule is tight when the weather is good, and we needed to fill the hole before the next rainy season kicked off, which can happen as early as November.

We needed 60′ of culverts, also called “conduits,” “tiles,” or “sticks.” Sticks are big and expensive, and you need a good trailer to pick them up. I ordered 3, 20′ x 3′ sticks at a supplier near Zach’s house, and he brought them along. 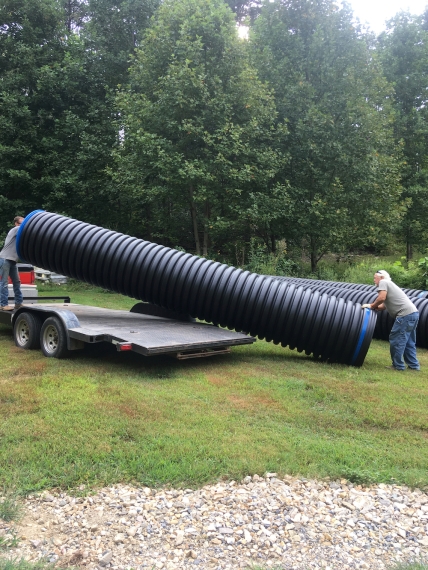 We needed hundreds of tons of rock. I started by ordering 60 tons of riff-raff (rock crushed into 6-10″ pieces). We’ve bought so much gravel in the past 3 years that I’ve made friends with a few of the truck drivers. One friend who dropped off a load of riff-raff said his trucking company had a pile of broken concrete hauled from a demo’d house foundation. We gladly took him up on an offer of 3 truckloads/60 tons of 24-40″ pieces for 1/2 the price of the riff-raff. 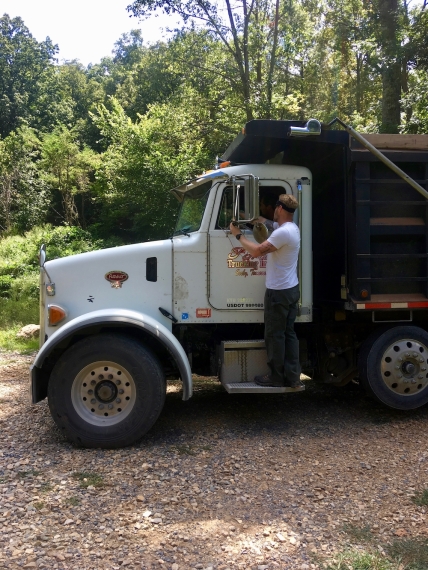 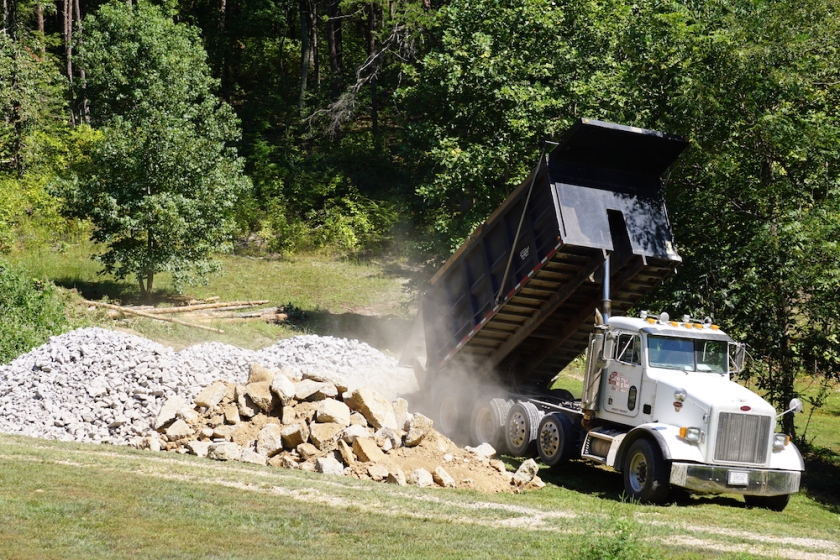 The dump trucks were still dropping off loads of rock the morning Zach started digging. He started by removing the old 3′ x 20′ sticks so they could be repositioned. 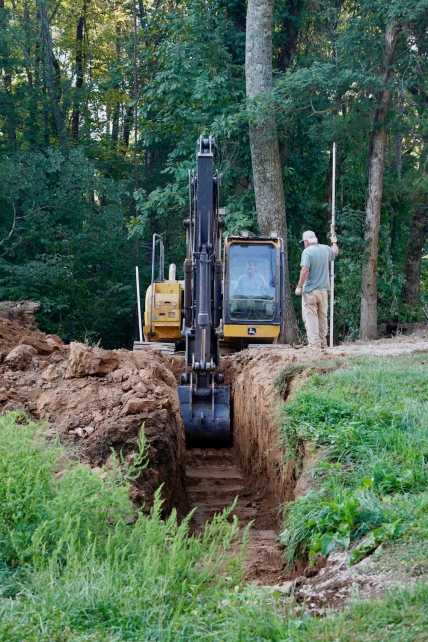 He dug a new trench in a straight line with the creek, then started filling in the sinkhole with the boulder-sized cement pieces. After that, riff-raff was added up to the natural slope of the creek.

He put the 100′ of sticks in across the driveway and entire sinkhole area.

The ends of the pipes were laid over 2 layers of geotextile fabric to stop erosion and keep water from escaping around the edges. Zach filled in around the pipe with riff-raff and continued until about 3′ below ground level. It took 100 tons of riff-raff to fill the hole to that point.

We laid geotextile fabric across the mostly filled sinkhole and began covering that with number 4 gravel (1-2″ rock with no dust). The idea was to create a well-drained surface that wouldn’t make the topsoil wash off or down into the rocks. It took 100 tons of gravel to reach 2′ below ground level since the upper portion of the sinkhole was over 50′ across at this point. 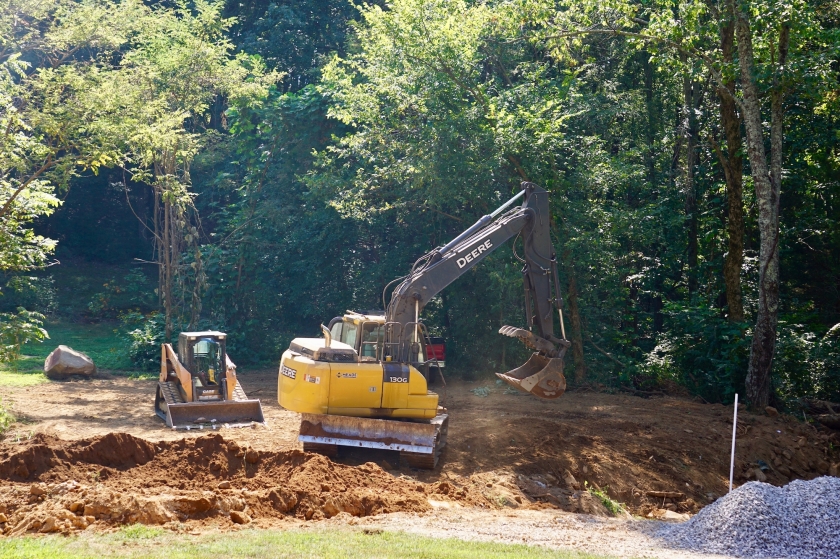 The last part was leveling it out with dirt. Our friend the dump truck driver offered quality fill dirt for $100 a truckload/20 tons. When everything was said and done, we had put 355 tons of material into the hole to make it whole again.

Enjoying the Spoils
The sinkhole has never been usable land before, so this view blew our mind. The hole used to be to the left of the excavator.

These days, there’s grass there. You’d never know what it looked like 4 months ago. The wet season is here, the creek is running, and the culvert is working beautifully. 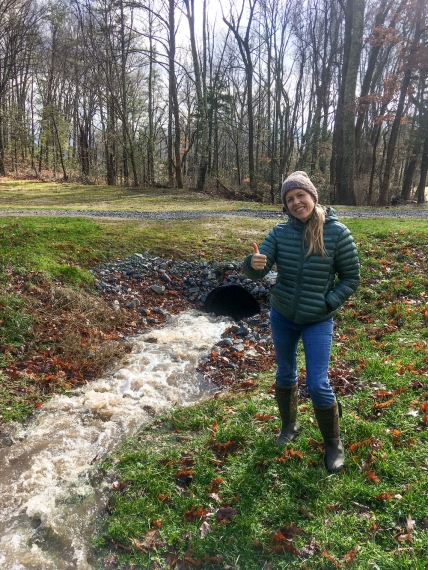 We have a new respect for the power of water and have learned to better read the land before excavation projects. Barry always told us to watch for sunken spots. You can’t necessarily prevent a sinkhole, but you don’t have to build over them, either.

Hopefully there will be no more surprises with this sinkhole. Zach buried a 2″ PVC pipe vertically into the sinkhole so we can stick a measuring tape in to make sure the hole isn’t still getting deeper. This will help us gauge if it’s starting to cave in again.

For now, we’ll enjoy our working driveway and the walkable square footage we wrestled back from nature.

Chris noticed some of the only meat at the store recently were the whole turkeys. Collards and sweet potatoes were also in abundance, so today was Marchsgiving and I’m in heaven. #mcm #yayleftovers #marchsgiving #hecookedicleaned #goodidea #stayhome
Chicks see grass for the first time, waste no time doing chicken things. #headlinesfromthehomestead #flockyeah #chicksrule #chickens #chickensofinstagram #earthtodome
Someone’s not taking poultry portraits seriously. #chickens #backyardchickens
You know why? Chicken thigh. #chicksrule #flockyeah #chickensofinstagram #roostercogburn
The Buff Brahma cockerel we ordered is turning into to a magnificent...Light Brahma. #oops We’ve actually been tickled about this since we realized it. He won’t look like the hens or be camouflaged, but he will be a looker. #roostercogburn #brahmachickens #chicks #chickens
Black Langshan chicks have been awkward, contemplative bundles of serenity. For an abundance of baby chicken pictures, check out our chick journals and brooder build on earthtodome.com. #adorable #chicks #flockyeah #chickens #backyardchickens #poultrypics 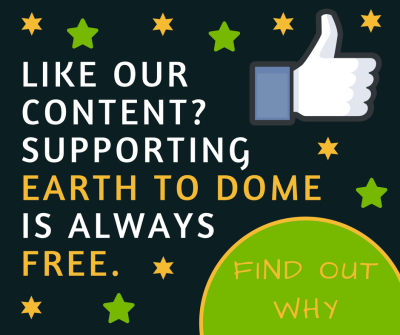 Chris noticed some of the only meat at the store recently were the whole turkeys. Collards and sweet potatoes were also in abundance, so today was Marchsgiving and I’m in heaven. #mcm #yayleftovers #marchsgiving #hecookedicleaned #goodidea #stayhome
Chicks see grass for the first time, waste no time doing chicken things. #headlinesfromthehomestead #flockyeah #chicksrule #chickens #chickensofinstagram #earthtodome
Someone’s not taking poultry portraits seriously. #chickens #backyardchickens
You know why? Chicken thigh. #chicksrule #flockyeah #chickensofinstagram #roostercogburn
The Buff Brahma cockerel we ordered is turning into to a magnificent...Light Brahma. #oops We’ve actually been tickled about this since we realized it. He won’t look like the hens or be camouflaged, but he will be a looker. #roostercogburn #brahmachickens #chicks #chickens
Black Langshan chicks have been awkward, contemplative bundles of serenity. For an abundance of baby chicken pictures, check out our chick journals and brooder build on earthtodome.com. #adorable #chicks #flockyeah #chickens #backyardchickens #poultrypics