I’m consolidating posts for 3 weeks because there’s no way I’ll cover them otherwise. There’s not much time for writing thanks to gardens… 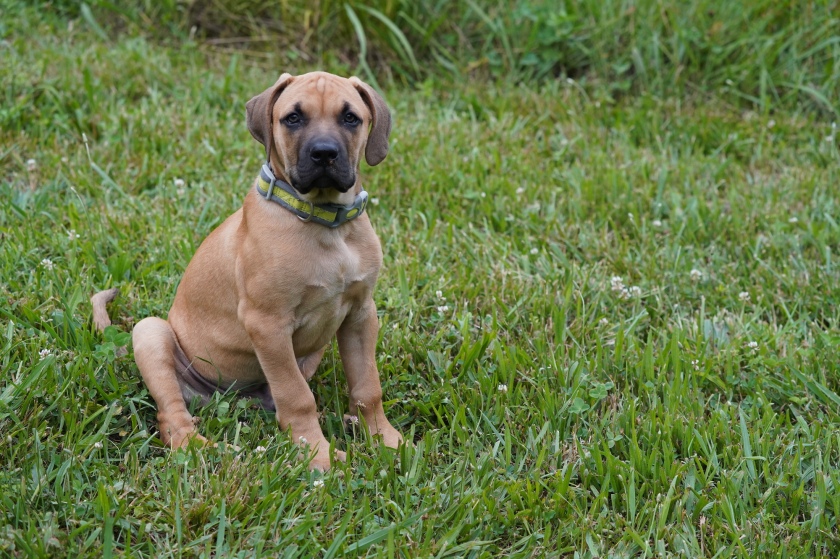 …and chickens in 2 places: the house and outside. It’ll be a relief to have all of them in the chicken yard.

The black snake hasn’t returned. Hawks have moved to other hunting grounds for the past few weeks. We rarely see them. Because it’s warm and the underbrush has grown up, the chickens spend a lot of time napping under cover, which means they can be out of their coop most of the day. I still like to leave a dog outside to watch for hawks, and I walk outside to check the sky from time to time.

When our new coop gets here, we’ll shore up the bottom of the fence more and stretch netting over the top of the run. But the coop still isn’t here. It was promised in 5 weeks but has been 9.

We had a few weeks of buffer, but at 9 weeks, I’m growing panicky. We’re ready to move the Easter Egger chicks outside but can’t until the older chickens have a new coop to move to. It’s especially important to get the babies out there because of the surprise rooster. If Cogburn can begin to familiarize himself with the baby rooster before it matures, there’s a chance they can co-exist in the yard together, which would make life easier – and safer – for everyone. Easter Egger roosters have a reputation for being super sassy against predators.

However, more urgently, Cogburn has outgrown the current coop. The tractor coop would’ve been fine for 6 hens with a yard to range in during the day, but I’m learning roosters need more room. Since about week 14, he’s been pecking the others harder. Recently, he’s been pecking me, too. Some people call these “rooster kisses.” 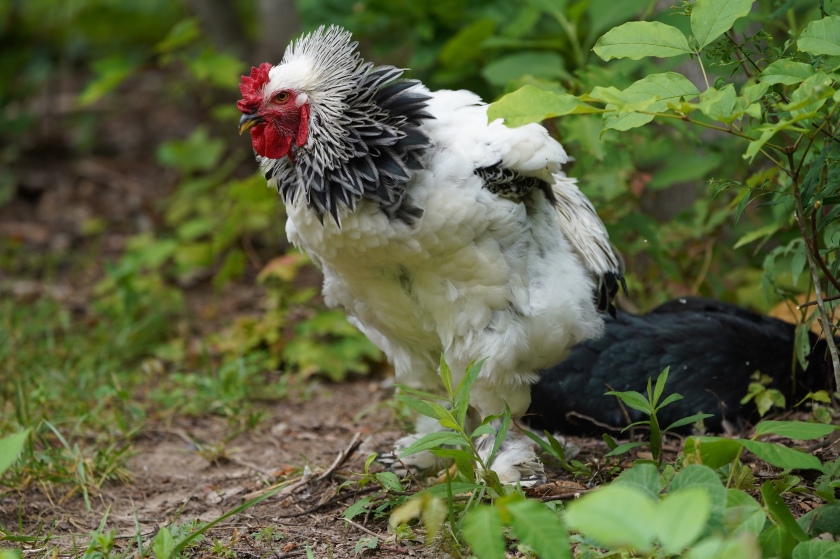 I can work with rooster kisses. Apparently if you ignore it, they stop <–edit from a few weeks later that he did almost completely stop pecking. Especially when he kept finding treats in my outstretched hand 🙂 But a bigger problem is that he started chasing the pullets in the confined space of the tractor in the mornings, causing mayhem. He also started losing neck feathers, a sign of stress. He’s a cockerel in crisis.

Roosters go through a juvenile phase for 1-2 years that can present challenges for novice chicken tenders like us. A lot of the problems are caused by the fact that they mature faster than hens. Raising him with a flock the same age sort of set him up for failure.

A bird Cogburn’s size has the potential to kill other chickens if his aggression is left unchecked. Even the stress of being pecked and chased could trigger disease in the pullets. Old-school thought is to cull the aggressive rooster and introduce a different rooster later, when your older hens can keep them in line. And yes, “cull” is a synonym for “kill.”

If you’re wondering, you get just as many eggs with or without a rooster, and you can eat the eggs either way. It’s important to gather eggs every day to keep the chickens from crushing or eating them. Without getting into the details, the act of gathering eggs pretty much stops them from ever turning into anything but breakfast.

So why keep a rooster? Some people want baby chicks for breeding or self-sustaining flocks. Others appreciate that roosters are spectacular and entertaining. We got a rooster to protect the flock and the keep the hens calm…he’s great at the former and 50/50 on the latter.

Nobody said raising animals would be easy. In fact, it’s more fun than I expected, but it isn’t sans stress. One morning, I groggily took the puppy out at sunrise to see Cogburn chasing Brahma ladies around the chicken tractor again. I’d been keeping the flock locked in the tractor until late morning for extra safety against crepuscular predators. Recently, Cogburn had started to be a real jerk in the mornings. People say the pecking order will look rough; it’s just part of the process. But this ruckus was so violent I trotted down to evict Cogburn into the chicken yard right away.

He had run Eula’s bell so hard that she wasn’t normal until lunch (her crop got jammed up and I had to feed her special treats and massage her neck off and on all morning). In addition, though I can’t confirm it, I suspect he’s the jerk who pecked off the top of Donna’s comb the day before.

We had reached a crossroads. It was time to consider the good of 6 chickens vs. the good of one angry bird. I tearily told Chris we had to get rid of Cogburn that day OR, according to a bunch of people online, there was a possibility he’d calm down if separated into another coop. But what coop?

Chris designed and built it that afternoon. It’s sturdily framed and well ventilated but stays dry in windy rainstorms, thanks to that well-thought-out roof (yay, Chris!). It has a locking door and openings are covered in 1/2″ hardware cloth to keep out predators. Future upgrades include off-white siding with barn-red trim and maybe a nice window.

And Cogburn’s still with us! This strategy worked. Thanks, “a bunch of people online.”

The first night, I closed him in the cabin at sunset. Chickens become drowsy despite themselves when the sun sets, which makes it easier to work on behavioral issues at dusk. He flapped around to look for an exit, then clucked loudly for 6 minutes (I timed it). Then he was was quiet. Those 6 minutes – and 3 minutes the next night and 2 minutes the next – were pretty much the extent of the stress any chickens seemed to experience. I sat there a few more minutes to make sure he was okay and peeked in on the pullets to check that they weren’t upset to be roosterless.

Far from it. They were settled down, all fat and sleepy, looking happy Cogburn wasn’t there to peck them off their favorite roost spots.

My biggest concern was that removing him from his family might stress him and make him and meaner. But somehow, Cogburn’s Cabin works as respite instead of isolation. A place away from the responsibility of being a rooster who has no idea how to be a rooster yet.

He’s not entirely separated from the flock, either. Because his worst behavior was in the coop in the mornings, I decided to see how it would work if he slept in his cabin, spent mornings alone patrolling the yard, and had the pullets join him in the afternoon. He’s had a few rough moments but does act calmer by the day. We’ve had no other chicken-to-chicken injuries, he’s more relaxed around me, and his neck feathers are growing back. He’s begun taking treats from my hand again and hopping on my lap from time to time. Before this, it had been weeks since he wanted to walk near me.

I’m glad to still have Cogburn and give mad credit to Chris for supporting us in figuring this out. No matter what happens over time, Cogburn inspired a deep learning experience, not to mention a reality-TV-style chicken-house build in an afternoon.

Before the cabin, the pullets had grown accustomed to giving Cogburn a wide berth. It may be a while until they want to hang out with him again, but sometimes you’ll catch them all together, looking like a happy flock. Here he is letting the pullets check out his bachelor pad. The chips on the floor are bedding from the tractor coop to make the cabin smell familiar.

I’ve also made adjustments in my behavior that have made a difference in how he approaches me. I’ll write a post on “gentling a rooster” soon because I’ve been obsessively researching rooster behavior for weeks, not just for Cogburn but because as I mentioned, we have a 2nd one. I’m calling the Easter Egger cockerel “Stilton.” He looks like blue cheese. 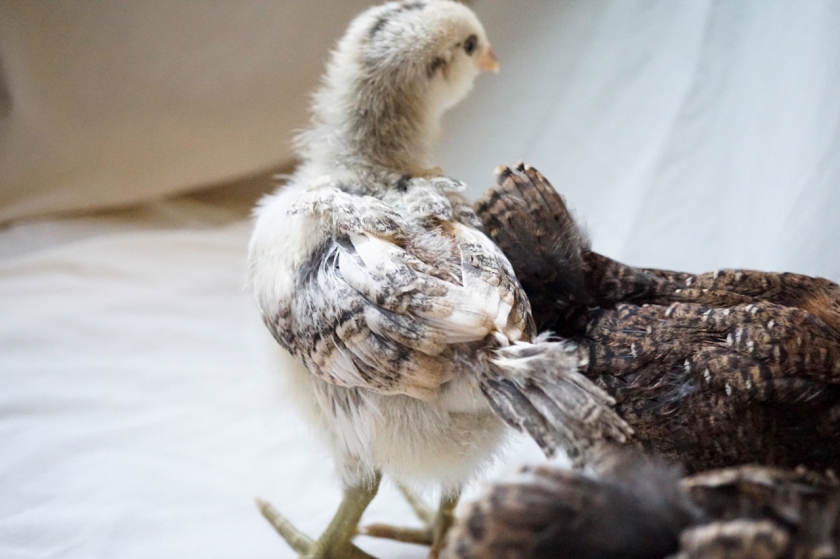 If you’re wondering why I’m so sure he’s a he, here’s a list of early signs an Easter Egger chick may be a cockerel: 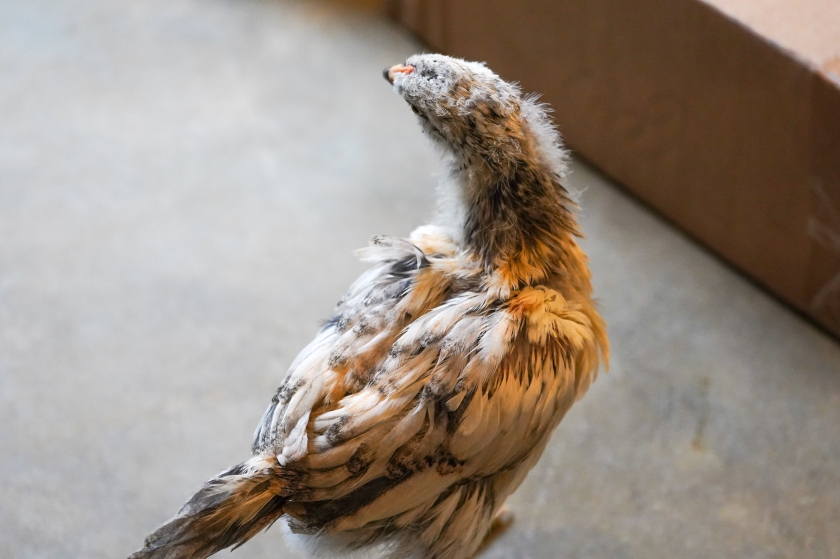 Stilton didn’t check all of the boxes right away. He didn’t start standing upright until almost 5 weeks. He’s friendly, but the pullets are friendlier. He doesn’t have huge legs like Cogburn did, and he wasn’t always the highest in the pecking order, whereas Cogburn was clearly the boss from day 1.

Can we keep 2 roosters right now? Maybe, or it may be more trouble than it’s worth. After all, we almost couldn’t even keep one. Time will tell.

The Easter Eggers still aren’t getting as much of my time as the first chicks did, and they still don’t seem to need it. This fearless tribe only wants to eat and flap and eat and go outside and eat. These 4 eat more than the 7 big birds did at this age even though they’re set to be roughly half the size, 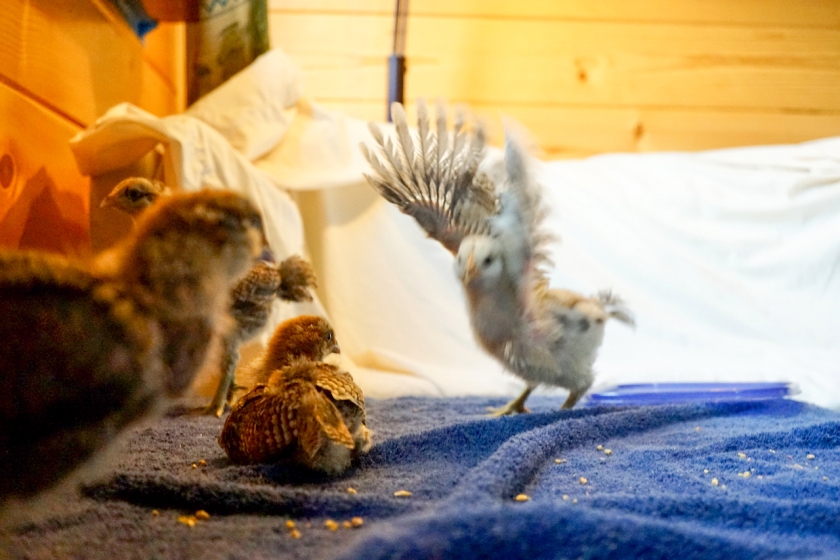 If the new coop were here, they’d probably be in the tractor full time at 5 weeks. Since it’s not, I cobbled together an exercise pen adjacent to the chicken yard. 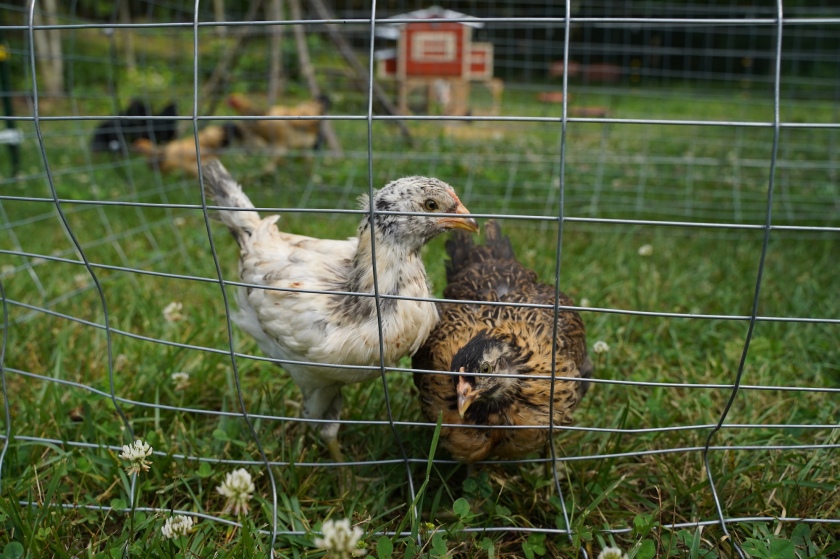 At first, I was letting them out in the grass by the chicken yard without a pen, but they have a strange habit of running straight towards the giant chickens on the other side of the fence. The pullets appear more perturbed about the chicks than Cogburn, who stands by the fence watching them, often chasing the pullets away. 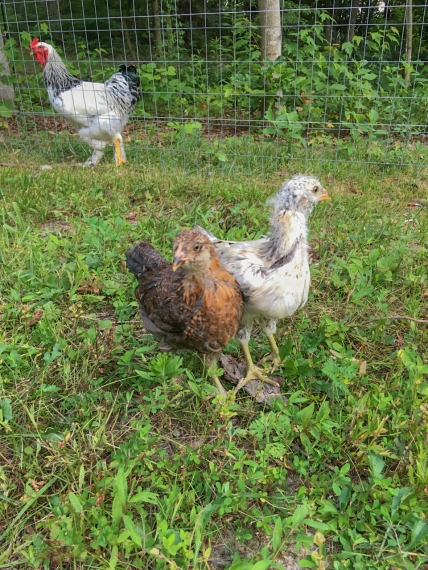 Then there was the harrowing moment when Stilton raced to the fence before I could stop him, straight to Cogburn. They had their first pecking-order stare down then and there, with Stilton 1/10 the size of Cogburn.

Fortunately Cogburn didn’t feel the need to peck or didn’t remember he could still fit his head through the fence. It was too late for me to intervene without escalating the tension, so I held my breath for the long seconds it lasted. Stilton stayed crouched, keeping an eye on Cogburn until he could safely shoot back to the other chicks. Here they are in a calmer moment.

Did anyone else used to say, “Oooooooo, a woo woooo” in elementary school when someone got in trouble, or was that just a North Florida thing in the 80s? Whoever made up “a woo woo” must’ve had chickens. The pullets say it all the time. You can hear it at the end of this video. They’re scandalized by the new chicks. It tickles me.

Our chickens are 5 and 17 weeks old at the end of this post. The Brahma pullets’ combs and faces are turning red and they’re getting little ear lobes. Redness is a sign they’re almost ready to start laying eggs!

People say to watch for eggs as early 16 weeks, but different breeds begin laying at different times. Some can take over a year to lay. Laying age for hatchery Brahmas and Langshans is supposed to be 24-30 weeks.

I’m not holding my breath but am checking the nesting boxes regularly anyway. They’re certainly starting to look like grown-up chickens. 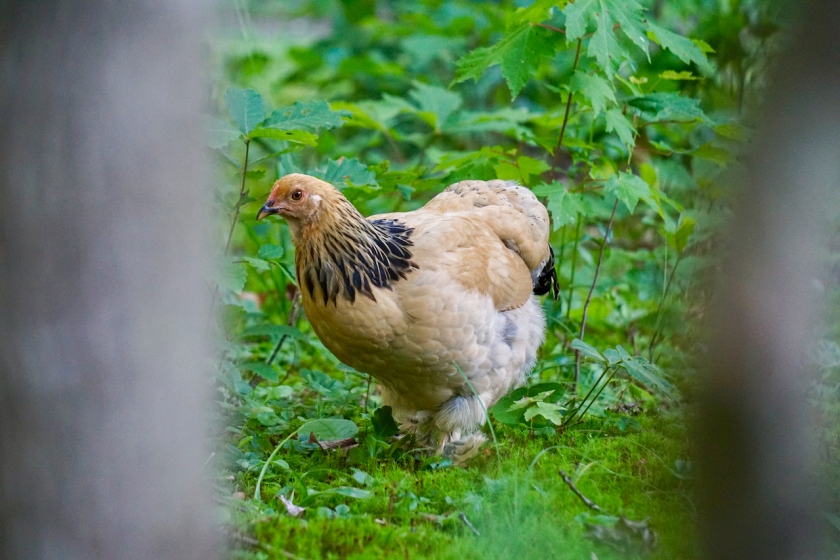 When the coop arrives, we’ll have a flurry of work to customize and predator proof it. Let’s hope that happens soon!